We are currently wearing masks during our worship gatherings.

Why the Son of God Came into the World

The Son of God came into the world to save sinners.

Two thousand years ago, early in the 1st century, somewhere between 0 AD and 15 AD, a Jewish baby was born. This baby would grow up to be a well-known teacher. He had followers. He was respected. He had influence. One scholar says that he “was remembered as one of the greatest rabbis of all time, a man of exemplary devotion and piety, who knew the law [of God] forwards, backwards, inside out and upside down, and taught it to all who would sit at his feet.” And yet, you've most likely never heard of him and even if you have, you don't know when he was born or what he did. This Jewish baby’s name was Gamaliel. This man is actually mentioned in the Bible a couple times. In fact, the apostle Paul said that he was trained by Gamaliel.

Christ is Jesus’ title, not his last name. “Christ” simply means “anointed one”. In the Old Testament, when God chose someone for his purposes, he would anoint them with oil to symbolize his choice of them and his presence with them. God told his people that one day he would anoint someone to be the type of king who would bring his rule and reign to earth. Interestingly, there were other people who claimed to be the Christ, the Messiah, God’s chosen one. They too had followers because people thought they really were the Messiah. But we aren't celebrating their birthdays either. So why do we celebrate the birthday of Jesus the Christ?

Why do millions of people celebrate the birthday of a Jewish baby born 2,000 years ago to blue collar, somewhat poor parents who lived in the backcountry of Israel in Nazareth, which many considered to be a hillbilly town out of which nothing good comes? Why him? The reason we celebrate Jesus’ birthday is because of what he came into the world to do. What he came into the world to do is important and meaningful to every human being who has ever lived and who ever will live. Jesus’ birthday is a big deal because Jesus is a big deal to everyone.

To see this, I want us to look at one part of one letter written by a man whose life was changed by Jesus. This man’s name was Paul and he tells some of his story in a letter written to a younger man he was mentoring named Timothy. You can find this story in 1 Timothy chapter 1, verses 12 through 17 (page 991).

In verses 12 through 13, Paul tells us who he was before Jesus radically changed his life. Yes, he is an apostle and ambassador for Jesus now, but it wasn’t always that way.

12 I thank him who has given me strength, Christ Jesus our Lord, because he judged me faithful, appointing me to his service, 13 though formerly I was a blasphemer, persecutor, and insolent opponent. (1 Timothy 1:12-13)

Paul was a blasphemer - someone who speaks irreverently and disrespectfully about God. In the Bible, you blaspheme God. But the person about whom he spoke irreverently was Jesus so you can see his high view of Jesus.

Paul was a persecutor. Before becoming a Christian, Paul was a Pharisee, a trained, religious leader among the people of Israel. The book of Acts tells us that Paul was hunting down Christians, dragging them out of their houses, and bringing them in chains to Jerusalem (Acts 9:1-2, 22:4-5).

Paul was an “insolent opponent”. “Insolent” means “showing a rude and arrogant lack of respect.” His opposition to Jesus and his followers wasn’t a friendly disagreement. No, he was rude and arrogant. He looked down on them, wanting to destroy them.

So what happened to him? The second half of verse 13 says:

But I received mercy because I had acted ignorantly in unbelief, 14 and the grace of our Lord overflowed for me with the faith and love that are in Christ Jesus. (1 Timothy 1:13b-14)

Paul wasn't a nobody. Paul was definitely a somebody, but he was known as a somebody for all the wrong reasons. Paul was not quietly minding his own business when Jesus came into his life. Paul was an enemy of Jesus and his people, actively opposed to Jesus and anyone who followed him. Paul was not neutral about Jesus. But Jesus poured out his grace on someone who actually hated him and wanted to destroy everything Jesus stood for.

And Jesus did not just forgive Paul but Jesus appointed Paul for service. This is the story of a devout enemy turned evangelist. This is Paul’s story of how he came to know Jesus. Jesus came to him and changed him.

Verse 15 sums up what he has experienced. But he states it as a principle that applies to everyone.

15 The saying is trustworthy and deserving of full acceptance, that Christ Jesus came into the world to save sinners, of whom I am the foremost. (1 Timothy 1:15)

There’s an interesting progression in Paul’s life. He wrote the letter to the Galatians in about 49 AD, around 15 years after he became a Christian. And in that letter, as he does in many letters, he calls himself an apostle (Gal 1:1) - one of Jesus’ sent ones. Then he makes a case for his validity as an apostle of equal authority with the other apostles (Gal 1:11-2:10).

Six years later, about 20 years after becoming a follower of Jesus, he wrote to the church in Corinth, and in 1 Corinthians 15:9, he calls himself the “least of the apostles” (1 Cor 15:9). Five years later, around 60 AD, about 25 years after becoming a Christian, Paul wrote to the church in Ephesus: he calls himself “the very least of all the saints” (Eph 3:8). “Saints” means “holy ones” and it was a common way that the New Testament refers to God’s people.

Over 30 years of being a Christian, Paul was on a journey of deepening humility. Over time, he became more and more aware of how much he needed Jesus. Over time, he grew in his awareness of how undeserving and unworthy he was to be loved by Jesus and used by Jesus. That is the growth journey of every Christian.

The principle is this: Christ Jesus came into the world to save sinners. Then Paul includes his story in it: of whom I am the foremost. Then in verse 16 he tells us:

16 But I received mercy for this reason, that in me, as the foremost, Jesus Christ might display his perfect patience as an example to those who were to believe in him for eternal life. (1 Timothy 1:16)

If the apostle Paul was here, he’d say: “Look, I was the ultimate fixer upper. I was in such bad shape. Most people would have considered me a hopeless case. ‘Don’t waste your time on him.’ But Jesus didn’t do that. Even though I am the worst of all sinners, he came to me and changed me. And if Jesus can do this for me, he can do it for you too.” Paul was like a car that you should just junk instead of repair. He was like a house you should just condemn and tear down. It would take more effort to fix than to just buy a new one. Hopeless. Paul is an example telling us that no one is beyond the reach of Jesus' mercy.

It’s almost like he knows people will say, “But you don’t know what I’ve done. I’m too bad. My life is too big of a mess.” And to that, Paul looks us in the eyes and says, “Let me tell you my story. I would have thought the same thing as you. Jesus saved me so that no one can say they are too far gone. There is no amount of sin, evil, or wrongdoing that is too much for him to handle.” The truth is, that anyone who claims the name of Christ by calling themselves a Christian is a promo for the mercy, patience, and grace of Jesus.

The reason we make such a big deal about Jesus’ birthday is because of the reason he came into the world and because of what he means for people who have fallen short. The birth of Jesus into this world cannot be over-celebrated. Katie, Hudson, and I parked in front of someone's house for 20 minutes watching their choreographed light show, tuned in 98.3 to listen to DJ Santa and the playlist.

Perhaps you look around at our world and think: it’s all become too commercialized, people are decorating their houses and don’t even know what it’s for, we’ve gotten away from the reason for the season. And perhaps you think: Jesus was born to humble parents in a humble stable with no glitz and glamor, so why do we put so much effort into making it such a spectacle?

I was made aware of an interesting essay written on this very topic. In his essay entitled “Joyous Surrender: A Rhapsody in Red (and Green)”, Joseph Bottum writes:

“Give me the vulgarity of inflated reindeer, bobbing out on the lawn. Give me trees drooping under the weight of their ornaments. Give me snow piled to the rafters, the dozen crèches [nativities] my wife scatters wildly around our home, like breadcrumbs leading back through the woods. Give me houses so lit up that the neighbors dream at night of sunstroke. Fruit cakes so dense they threaten to develop their own black-hole event horizons. Gingerbread cottages and Mouse King nutcrackers and wreaths on every door and silly Christmas cards and eggnog so nutmegged that the schoolchildren carolers cough and sputter as they try manfully to gulp it down.

Tastefulness is just small-mindedness, pretending to be art. And Christmas isn’t tasteful, isn’t simple, isn’t clean, isn’t elegant. Give me the tacky and the exuberant and the wild, to represent the impossibly boisterous fact that God has intruded in this world. Give me churches thick with incense and green with pine-tree boughs, the approach to the altar that feels like running an obstacle course through the poinsettias, and a roar from the bell towers so ground-shaking that not even the deaf can sleep in.”

He ends with this question: “What other response could we have to the joyous news of the Nativity that God has broken in, smashing the ordinary world by descending in the flesh?” (https://www.thepublicdiscourse.com/2014/12/14206/)

As Americans, we are perpetual over-doers. We are never satisfied so we want more and more. And the way we celebrate Jesus’ birthday is one of those times where we will never over-do it because it can never be over-celebrated. The birth of Jesus into this world cannot be over-celebrated. How can we ever adequately celebrate the birthday of the eternal Son of God coming into the world to save sinners?

There’s a magic to the Christmas season. The world around us is transformed. And all of that reminds us of how God so loved the world that he sent his only Son into the world to transform those who would surrender to him.

We can let it all point us to God, as Paul does in verse 17: 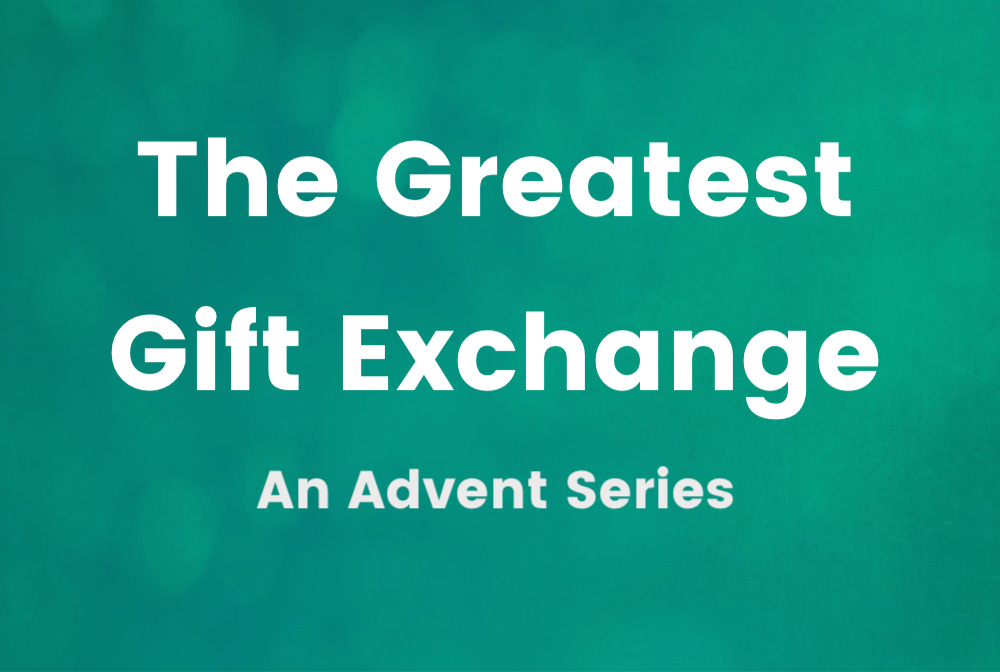 More in The Greatest Gift Exchange